It’s been a busy couple of days. We ventured out of town this weekend to visit my parents in North Texas and at bedtime the first evening was when we realized we had left Phoebe’s water pump charger at home. It never fails, we end up out of town without an important medicine or in this case a battery charger that we desperately needed. We decided that we would try to make a go of it by just using the pump at night when she needs continuous water through her ng tube and we would manually push water into her tube through a syringe every fifteen minutes for her two day bolus’. Fun.

Everything was going according to plan until the 2nd night when I dropped Phoebe’s DDAVP vial on the kitchen floor when I was drawing up her bedtime dose. It smashed to pieces and I was fortunate to be able to get the last few drops out of the smashed bottle, enough for her bedtime shot dose. But DDAVP is what regulates her kidneys and urine output so she MUST have it every twelve hours. Which led to a midnight conversation with our endocrinologist in Dallas and a prescription fill at a 24 hour pharmacy 45 minutes away. Take note: if your child has cancer, living near a 24 hour pharmacy is a must. Nathan was going to leave early in the morning to fill the prescription before her next shot was due, but at 2 am her water pump battery began to beep letting us know it was dying. Phoebe can’t make it through the night without a water bolus, so we either had the option of setting our alarm for 15 minute intervals and pushing water through her tube for 6 hours straight or Nathan driving her the hour and  15 back to Dallas to plug her pump in.

So, At 2 am my husband; the best father in the world, loaded Phoebe up and drove 45 minutes to Denton to pick up her DDAVP med and then home to Dallas to hook her up to her water pump. At 7 am she spiked a fever and at 8am it hadn’t abated, so off to the ER he went with her. This man deserves a Gold Medal in being a servant hearted husband and father..Phoebe was given antibiotics as a precaution and then admitted when her sodium level came back high because they wanted to regulate her sodium for her MRI today. So, Nathan’s Dad came and got the boys and I in North Texas and I traded places with Nathan at the hospital.

Without making a long story even longer, I’ll just say that I spent my night arguing with the new resident doctor about water levels and trying to get Phoebe’s saline bolus switched from 1/2 normal to 1/4 normal and sneaking Sprite to her. At 6 am when all of their efforts failed and her sodium was going UP rather than down (which is the whole reason we were admitted in the first place) he finally let me run the show. I told him I wanted 70 mls in her ng tube water bolus and her IV saline reduced and I proceeded to give her water pushes through her syringe when no one was looking. This is such an uncomfortable  position to be in sometimes, but I have discovered that she suffers when I don’t advocate for her. Who knew we would have to be so “on our toes” in Phoebe’s care  regarding even the medical side of things? I find that most doctors will say “You obviously know your child better than we do, BUT we want to do x,y,z and see if that works” and when I already know AND TELL them that we have tried x,y and z before and it doesn’t work and they don’t listen, what do I do then? Grrrrrrrrrrr.

So, at long last, her sodium is on the down swing thanks to the help of a nurse that knows me and Phoebe well. She told the resident to hand over the reigns 🙂 Lol. I am not trying to sound prideful, but it really IS true…when it comes to managing Phoebe’s Diabetes Insipidus, we do a better job than the residents on the floor. End of rant.

Right now Phoebe is in the playroom painting with her friends who have Leukemia. I have missed being around the other cancer parents here. There is an instant, overwhelming connection with a parent who has a little one with cancer. The woman I met today has been walking through chemotherapy with her 3 year old daughter since 2010. Incredible. The other sweet family we always encounter in the halls has a 1 year old with 2 separate types of Leukemia. She is now on experimental drugs. My heart aches and swells in this place. I want to wrap those parents in a big hug and cry with them, but I rememeber my reaction when others have done the same to me. At times, the veil is so thin between maintaining composure and completely going over the edge and pity from others can shatter you into a thousand tiny little fragments. So, I maintain my composure with them so that they may maintain theirs. We both understand. 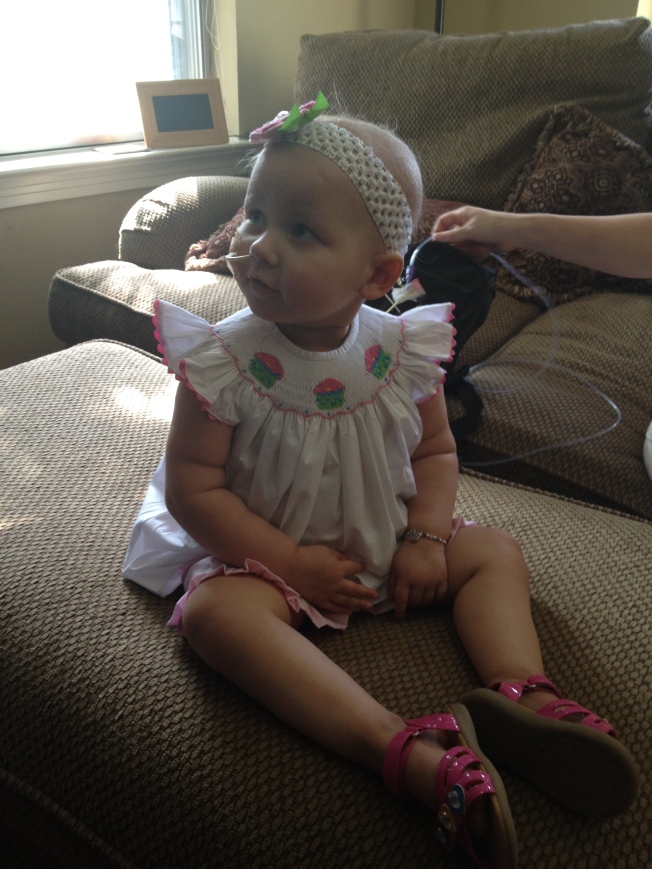 It is noon now, and soon Phoebe will be be taken down  and prepped for her MRI. She will be intubated and sedated and it will take 2 hours to complete the procedure. She will also receive her intrathecal (spinal) chemotherapy injection for this next round. We will have results shortly after the MRI. Please pray that she does well with the entire procedure and of course for No Evidence of Disease.  MRI days hold a lot of anxiety and also a lot of joy when the results are clear. But we also understand the gravity of these test results should they be bad. Thank you all for standing with us.